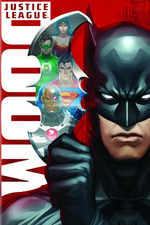 The latest release in DC Animation’s line of direct-to-DVD releases, Justice League: Doom stands as proof positive that Warner’s fast-track plans to assemble the iconic superhero collective by 2015 needn’t necessarily end in disaster. Directed by studio mainstay Lauren Montgomery, the film balances its broad cast with aplomb, allowing equal time and characterisation to each of its instantly recognisable heroes. Centred on a plot by evil mastermind Vandal Savage and each of the protagonists’ most fearsome enemies to incapacitate them with contingency plans stolen from Batman, it’s a work of surprising intimacy and hubris, the inter-group conflicts and personal traumas—particularly of Green Lantern, brilliantly portrayed by Nathan Fillion—forming the backbone of a storyline riddled with action. Whoever should find themselves saddled with the considerable task of helming a live-action convergence of these characters without the benefit of stand-alone introductions for all à la Marvel could stand to learn a lot from Justice League: Doom.