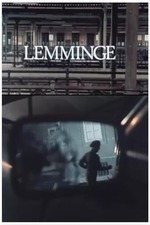 Coming but three years after Three Paths to the Lake, a film quite distinct from what would become recognised as his style, Haneke's third television production sees the director making a massive artistic leap and landing damn close to where we find him today. Lemmings, Part 1: Arcadia locates itself in time with reference to The Virgin Spring as "the latest Bergman film", a simple nod from one director to another that had me whooping with delight. Bergman is a clear influence for Haneke here (and one we will see far more of in the second part), who combines influence with innovation to craft a style of his own that suits the story he seeks to tell. It's a tale of Haneke's own generation at the onset of adulthood, coming to realise some of the darker truths of life as they interact with each other and their elders. There's much more of the shocking material typical of Haneke than his previous film, sudden bursts of awful violence and depravity beginning to sneak in as his worldview here acquires a more personal note, and thereby a more frank and honest one. His characters are more embittered and pained, more cold and closed-off. Arcadia is a brilliant snapshot of youth, a passionate and powerful work that sees Haneke already moving toward total mastery of his craft.