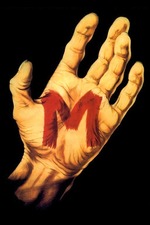 Is Peter Lorre the most sympathetic, pitiful actor that ever there was? His face had such delicate fragility, his bright eyes so childish and helpless, that no matter the consistency of his character you can't help but like him at least a little. In M, Fritz Lang pushes this thesis to breaking point in casting Lorre as a child killer; perhaps the biggest surprise for me, coming to this esteemed classic after years of hearing its reputation, was that it's really not so much about him. It's about society—that of the time, but no less that of now too—and the way it becomes gripped by such hysteria that it begins to destroy itself. It's about justice, and just how just it really is. It's about authority, and about sympathy, and about humanity, and about at least a dozen things more. It's Fritz Lang's favourite of his own films, and really, it's not hard to understand why.