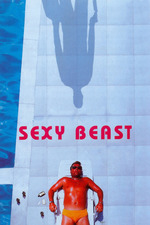 Making his bones on commercials and music videos, director Jonathan Glazer tried his hand at feature filmmaking with Sexy Beast; rarely has a debut been so contemporaneously confident and energetic, so assured and so gripping. Ray Winstone plays a former safe-cracking gangster retired to a Spanish villa where he lives his days in sun-soaked luxury until a boulder crashes from a mountain above, almost crushing him and forebodingly foreshadowing the arrival of a former associate intent on returning him for one last job. It’s a plot that could hardly be more prone to the tropes of the gangster film, yet Glazer crafts something truly original, his punchy visual style of sharp edits and meticulously focused frames working with the catchy soundtrack to elucidate the mental states of each of his characters. Ben Kingsley earned an Oscar nomination as the unwelcome houseguest; almost unrecognisable in his sweary fury, he’s the best thing in a movie bursting at the seams with greatness.