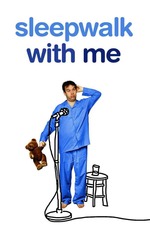 Negating any and all concerns of self-obsession by beginning with a witty tirade of self-deprecation, comedian Mike Birbiglia’s adaptation of his own one-man show is a unendingly endearing take on relationship woes and the difficulties of realising one’s potential. Addled with as many neuroses as Woody Allen, and almost as much humour, Birbiglia is a terrific anchor to this tale of a couple on the cusp of major commitment, considerably aided by the majestic Lauren Ambrose as his girlfriend. The pair make for a marvellous couple, which makes all the more real the pain of their slow drift apart as Birbiglia’s dream of earning a living as a stand-up comic finds realisation in his observations of the perils of pre-marital life. It’s an unfortunate drawback then, that the film’s central conceit—Birbiglia’s stress and sleep deprivation-rooted sleepwalking disorder—brings little to the film, dulling the impact of an otherwise unendingly amusing feature-length anecdote.