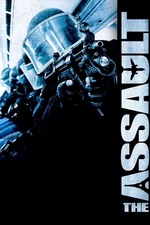 A certain candidate for alternate Christmas movie viewing, The Assault takes its cues from the December 24th, 1994 hijacking of an Air France flight out of Algiers to Paris, following the tense operation mounted by a special task force of the French Armed Forces to intercept the Jihadist terrorists as they refuel in Marseilles. Director Julien Leclercq, aiming presumably for an aesthetic of gritty realism, strips the film of almost all colour, the resultant desaturation contributing only a gloomy visual dankness that brings little of stylistic worth to proceedings. That the antagonists and their motivations are so thinly sketched is—whether the reality of the situation or not—among the film's most significant failings, its inability to move them beyond "Allahu Akbar" screeching caricatures stripping it of any real sense of conflict. Nor are any of the film's protagonists interesting characters, the task force and behind-the-scenes team scarcely able to offer a single recognisable human being between them.