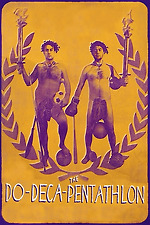 Considered together with Jeff, Who Lives at Home, it might be fair to observe that The Do-Deca-Pentathlon attests a certain self-reference to the Duplass’ work, this second film’s focus again on a pair of brothers a sure hint of certain autobiographical tendencies to their filmography. We can only hope not: if Jay and Mark Duplass share any similarities to their central characters here they must be emotionally stilted and unbearably petulant people indeed. A far more modest offering than Jeff, The Do-Deca-Pentathlon sees squabbling siblings Mark and Jeremy recreate the titular 25 event contest, the source of their disconnect some two decades prior. Playing essentially like a discarded idea for the year’s other Duplass film—the characters’ living situations are even remarkably similar—this is a work of such lesser quality as to inspire wonder as to how it can have come from the same minds at all, neither its comedy nor drama even half as convincing.