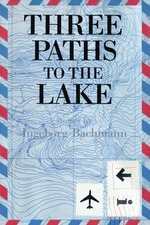 It was 2009 when I first saw a film by Michael Haneke, a director I'd at that point not heard of. It was The White Ribbon, and when the lights came up I was suddenly reminded that I was sitting in a cinema. The great auteur's famously reserved aesthetic and stark thematic material hit me like a train, and immediately I wanted to see more, I needed to see more. Three years down the line, having seen every feature to Haneke's name and found him to be among the greatest cinematic artists that ever there were, I come at last to his television films. Despite having access to several of these for some time now, I've sat on them, withholding the last new Haneke experiences left for me in the world. Perhaps I didn't want to be done. Perhaps I feared the younger director, not nearly so well versed in his medium, might actually have made a bad film. Three Paths to the Lake is his second directorial effort, and while it certainly hasn't the power or artistry of his theatrical releases, it's an immensely impressive work that surely attests the major talent to come. The titular paths are each tried by the protagonist—an adult daughter returned to visit her father in the countryside—in a smartly staged metaphor that reflects both contemporary Germany and this woman's efforts to live her life with meaning. Stylistically, Haneke has yet to find his footing: he adapts from a short story and relies on a voiceover that, while well used, shows him yet to fully come to terms with cinematic storytelling. Even for its shortcomings, Three Paths to the Lake is a fantastic film, a smart and meaningful work from a hugely promising eye centred on two brilliant performances and a real sense of longing for meaning in life.