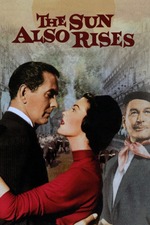 Hemmingway's novel dealt with the lost generation: twenty-something veterans from WWI adrift in Paris. However, when those parts are being played by Tyrone Power (43), Eddie Albert (51), Errol Flynn (48) and Mel Ferrer (40), the movie seems to be more about a bunch of middle-aged men on a European vacation, having a collective mid-life crisis over Ava Gardner (35).
The only age-appropriate actor is Robert Evans, who, by contrast, now seems too young and certainly too baby-faced to play the broodingly attractive bullfighter.
Whereas Hemmingway was an atheist, the movie turns very religious towards the end, something which seems designed more to placate the American audiences of the fifties rather than accurately portray the kind of people who put the 'roaring' into the roaring twenties.
Ultimately, the movie can't prevent the ennui of the characters to seep into the audience: it's a pretty dull movie.