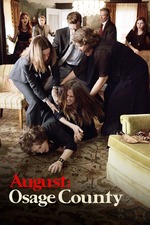 I'm not going to lie that Tracey Letts was the main selling point for me in seeing this film. Without it being based on his play and written by him I would have easily passed it by as on the exterior it resembled nothing at all special or remarkable. In fact from surface value the film seemed too normal to be the spawn of Letts and I knew I had to watch the film to uncover what the man had to be hiding. And I was not wrong.

This is certainly a cynical tale of a dysfunctional family riddled with black comedy but it is far darker than what the film's marketing has let on. This again should be expected coming from the mind that brought us Killer Joe and Bug but it was that damned marketing and maybe even the presence of top billed actresses like Julia Roberts and Meryl Streep that threw me off. Essentially the same way Matthew McConaughey was casted in Killer Joe that befuddled everyone for such a sleazy disturbing role (and one that ultimately broke the mold for him away from his past efforts as a rom-com leading man), this film seemed to give Roberts the same treatment. It's amazing to here Julia spout with such vitriol:

And to Meryl Streep of all people. Well Letts play was the selling point for me and he did deliver in a twisty deranged sort of way with intricate characters, revelations, and snarky yet brimming with wit dialogue. However to my other surprise, the acclaim for both top billed actresses turned out to be the real deal as well especially Streep. If it were a weaker year for the best actress category, Streep would be looking to add yet another award to her weighed down mantel. She was nothing sort of phenomenal and her performance never felt caricatured to that of a drug addict as she somehow miraculously managed to pin down all of the subtleties and behavior of one so naturally. Roberts was memorable but nothing compared to Streep's presence.

My only complaint that prevented me from really immersing myself in the material is the inexperience of the director John Wells. The film lacked any sort of atmosphere (which did cause issues for how the audience is suppose to react at certain times in the film towards the material) and visually it was unappealing. Being compared by some to Who's Afraid of Virgina Woolf is a tad bit unfair but allow me to use that film as a example of how Nichol's (which was actually his directorial debut) created mountains of tension in a claustrophobic environment with his two warring characters. August: Osage County was indifferent to damn near everything else that went into making the film other than filming the actors chew on these beautiful and vicious words.

Still the film had alot of good components and to see Streep in action of a Tracey Letts script is about one of the best things you will see all year.