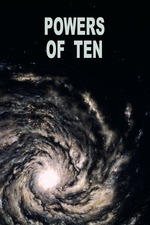 More of a educational video than film (even known for being used in the classroom environment) but it still does not make it any less intriguing.

Providing much food for thought in the information visually displayed and narrated Powers of Ten contains most of its power in dissecting the universe both large and small in just under nine minutes. This is essentially the serious version of the galaxy song sketch in Monty and Python's The Meaning of Life. Both show how truly minuscule we are in the grand scheme of things just the later does it in intentionally offensive humor. A film like this that actually shows how vast the universe is zooming out to the widest stretches of the unknown until whole galaxies look like specks of dust validates the above point even more so. Of course the second portion of the film is a retraction and further zoom in to explore the inner workings of organic matter. Even further to see atoms and nucleus, the biology of all things and the images that appear do not look much different than the orbitals of space.