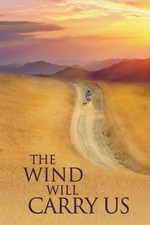 Kiarostami again mesmerizes his audience with a tableau of simplicity, but when one closely examines the details, they will find vast richness in symbolism and metaphors. The Wind Will Carry Us takes the viewer on a journey through ancient Iran into a small hidden village along the mountains and blanketed by beautiful valleys. To be honest, with such an exotic and unforeseen locale, I almost have a hard time deciphering whether this is one of Kiarostami's most gorgeously photographed films or the immense visuals were just a product of the content filmed (this heavenly and simple mountain village). It also could be both, because I cannot deny Kiarostami's superb framing, especially when inside the village with the rooftops looking down (or up) which in itself probably contained so much inspiration for the auteur.

The plot is simple, but it is revealed in a way that keeps the mystery alive for as long as possible as to the intentions of the protagonists. Even when their intent is finally revealed, it is still not a crucial point and does not serve as a major revelation. The point is in these "engineers" experience of remaining idle due to circumstance out of their control, the way they change to adapt to the village life, and what they come to know about themselves. Now I keep saying they, but it is truly one character representative of them all as the others are never even shown on screen. Sly Mr. Kiarostami actually pulls that maneuver quite a bit in this film, leaving many character's voices heard, but never showing their face. This technique does help chain the audience to the main Engineer's perspective and allow us to feel his frustration, thought, and then calmness.

The metaphors within the film are sometimes very subtle and others not so much, but they always feel natural with the environment and therefore never forced. Such examples include the overturned turtle struggling to regain his position, or the dung beetle in his relentless and enduring journey. These slight expressions through nature mirror our own existence of hardships faced and futile chores to find importance in our lives. Kiarostami's film relaxes the senses and can be simply viewed as a serene and peaceful experience, allowing the wind to carry us through his form of cinema.

Although if one wants to further understand the film on a deeper level of exploration (then even what I was able to achieve), this Wikipedia segment of the film explains the film superbly:

"The Wind Will Carry Us is a poetic interpretation of complex issues such as life and death, the modern and traditional, and the local and global. A traditional village with its old rituals and laid-back life is visited by three strangers whose intentions are mysteriously kept back. A cell phone connects the remote village to an external world that seems to be waiting for the ancient to die. The urbanite visitors interfere into the mundane routines of secluded lives, metaphorically portrayed when the engineer enters into a barn to buy milk from a young girl. At times, the local appears to be defenseless and accommodating about the presence of the global, at other, she is clearly disturbed and irritated. The two worlds do not confront each other, however, nor do old and new. Rather, these binary oppositions melt in a poetic landscape that shies away from providing answers. There are several references to the poems of Iranian poets such as Omar Khayyám and Forough Farrokhzad in the film that are all about the ideas of life and death."