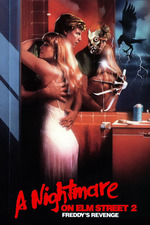 While it’s a decently entertaining sequel, A Nightmare on a Elm Street 2: Freddy’s Revenge is an insane mess of a film.

It does have its fair share of memorable scenes, like the scene in Grady’s room and the pool scene in particular. Robert Englund again is great as Fred Krueger, and is probably the best thing about this film, for the limited time he’s in it.

I really just couldn’t get behind these characters. They lack the charm and depth of the characters from the original.

There are some ridiculous plot lines throughout the film, the one involving the PE teacher in particular, that have little to no explanation and end up in a confusing mess. That whole sequence with Jesse and his teacher was extremely messy.

There were some things to love, but overall this film is nothing compared to the original. I’m desperately hoping the rest of the franchise is better than this.