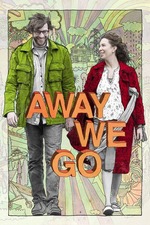 "Away We Go" is about as gentle as a film can possibly get. In some ways the film acts as a tonic for Sam Mendes's previous film, the intensely nihilistic and bleak "Revolutionary Road". Both films carry some similar themes about parenthood, responsibility and the feeling of self-worth, a motif that's become somewhat ingrained in Sam Mendes films prior to his James Bond gig.

Away We Go has a very familiar sensibility. The film can essentially be described as an indie road movie about a couple, Burt (John Krasinski) and Verona (Maya Rudolph) who're expecting their first child. It has that journey of self-discovery which is a well worn plot device especially in the last 10-15 years. However, where this film separates itself from the crowd is that whilst other films play out in a more melancholic fashion, there's a loving, up beat tone that's ever present during the course of this film. That's not to say that the serious moments are played for laughs; because they're not, they're just not lingered upon depressing the story.
It was rather refreshing to see a film where the two main characters actually feel like a real, loving couple without the need for forced plot barriers to create 'friction' and drama between the two.

One main complaint that i'm sure has arisen is, where does the the dramatic tension come from if not the main characters? And that can be easily answered, from the characters and situations they encounter. As the couple go on an exploration to find a new place to settle down and start their family, they visit friends and family of old along the way, stopping at several cities across the U.S and Canada. Each family they meet seem perfect to begin with, but as we spend time with them we see the layers peeled back exposing the neurosis that some people and families can posses, and that, which the couple see as a potential outcome of their family/relationship.

Unfortunately, the film never really gets too heavy into it's themes which I found to be a little disappointing, as we see Burt and Verona meet up with multiple families along their journey, the film spends maybe ten or so minutes with each, which never really develops of expands upon its supporting cast, leading to some lingering cliches.

With that being said the film does an excellent job exploring the fears and insecurities of it's two leads, John Krasinki is his usual charming funny self, and Maya Rudolph grounds the film with a touching and reserved performance, together they create an honest and believable couple that feel genuine.

There's nothing particularly special about the style of the film, it's filmed like a lot of indies that came out in the same year such as: "Adventureland" and "Up in the Air" which come to mind. However, that's not a massive issue with this film. Away We Go has a strong script, with well rounded and likeable characters that go on interesting journey. And as a nice bonus, the film has a fulfilling ending to compliment the journey.