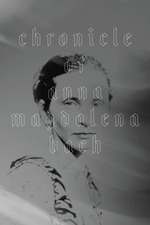 If you ever wondered what a Wikipedia entry looked like as a film, look no further then "Chronicle of Anna Magdalena Bach."

I caught this film on Mubi as they're currently having a retrospective of Danièle Huillet and Jean-Marie Straub's filmography. I'm unfamiliar with their work and I was piqued by the description. This is a biopic of Johann Sebastian Bach, and as a straight biopic it does its job. However, as a film this was a pretentious borefest. Don't get me wrong the music is absolutely wonderful but the structure of this film was incredibly dull. I got bored halfway through and read a book whilst the music was playing. There's ZERO story to this film other than a monotone voice over of someone reading Anna's letters to Bach, that's it! The rest of the film is an actor pretending to play Bach in different halls/concerts, I mean that's literally it.

There is no cinematic quality to this film. You're better off just sticking a CD on and reading Bach's Wikipedia page, you'll get the same amount of enjoyment doing so, and it'll take you half the time. This is the kind of film I can see people inflating their score just to appear cultured. In reality it's crap. I did have this at a 2.5 but writing this has annoyed me even further so it can get a 2.

That Obscure Object of Desire

The Warrior and the Sorceress