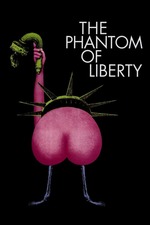 The Phantom of Liberty

Luis Bunuel's "The Phantom of Liberty" is a surreal and satirical look at everyday life. This film basically acts as a series of interlinked segments. The film has no linear protagonist and switches POV from one character to the next. Most scenes last for about 5-10 minutes and usually the have no conclusion, acting as an almost voyeuristic peak into the characters lives. Bunuel is able to effortlessly switch between stories transitioning without it ever upsetting the pace of the film. It's really well done.

The film is also loaded with Bunuel's trademark absurdity, often ridiculing the mundanity of modern day life. It's hard to pin down this film as there are so many different characters and situations. So, I'll just say that if you're a Bunuel fan then you should check this film out and if you're not, you probably still should. It's not quite on the same level as "The Discreet Charm of the Bourgeois", but it's still a very strong film from Bunuel.