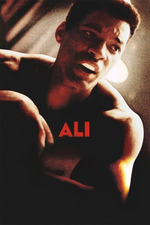 Far more powerful and affecting as a political text about a legend reclaiming his power and influence within the corrupt system he has to work within without bending to The Man then as an actual boxing picture. Mann and Lubezki do their best, at times trying to turn the fights into digital smears of motion and power, but honestly it feels like it's nobody's major interest in making this film. It's not much of a problem with the first two acts or so of the movie, but when we get to the last half-hour and it suddenly becomes a straight boxing movie it saps the energy of the production and goes into the standard true-story sports cliches.

Still there's a lot of fantastic stuff here, with Smith giving a real charismatic energy and power to the lead role and Mann being truly willing to dig deep into the political mire around Ali's life instead of dumping it in favour of making a more traditional crowd-pleaser. It's a shame it goes so rote in the last act but what's good here really crackles with energy.