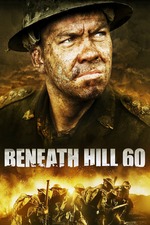 A well made war film with an interesting story based on real events.

Honestly, this film was pretty boring and I wasn’t all that into it. I think maybe if I was more invested and in the mood to watch it then maybe I would have enjoyed it more. I appreciate all the work that went into making it though, it was a big production. I think the sets, costumes, special effects, and makeup were all well done.
I thought some scenes were very intense and claustrophobic, as the filmmakers intended, and I enjoyed mostly all of the scenes where they were in the mines. I just didn’t care for anything else.
Overall, I think it was a pretty good film and I can see a lot of people enjoying it much more than I did. Although there were a few parts I really did like. It’s a good war movie, but will I ever be watching it again? Probably not. The story was really cool and it’s crazy that it really happened, but it just wasn’t all that entertaining to me. This was a TV movie with a really big budget. Well made, but in the end too boring for me to really enjoy. There’s so much space in between the good parts that it’s really hard to care. It was very well made though so I’ll give it that. Just not that enjoyable for me. It’s a solid film tho.