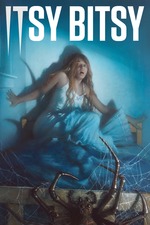 From the beautiful hand-drawn posters by legendary Matthew Peak (responsible for "A Nightmare on Elm Street" franchise's iconic posters) to the excellent spider puppet made entirely with practical effects by special effects master Dan Rebert (who worked on "Slither", "True Blood", "Necronomicon" and so on), it becomes clear that "Itsy Bitsy" is a project made with pure love for the genre.

The overall production is quite impressive for an independent film with a small budget, especially the spider and its disgusting bites, all done with great practical effects. And that makes all the difference.
The repulsion that each of the spider's appearances causes is stronger when we can observe the texture of its exoskeleton and the bloody pus coming out of the wounds.

Regarding the cast, the biggest names are Bruce Davison and Denise Crosby (from the original "Pet Sematary") who play supporting characters. Although the acting of the main cast is a little rough at times, it's overall satisfactory.

The biggest problem with "Itsy Bitsy" is that characters suffer from too many personal issues that end up taking too much screen time from what really matters: the spider.
I appreciate the movie's intention to make me sympathize with them, and I ended up cheering for the family, but it's just too much drama.

How many times do we have to see Kara fight her painkiller addiction? Or see Walter thinking about his deceased wife who has no importance to the plot? Was Denise's character really necessary? For most of the movie I found myself waiting for all the boring drama to end so the spider could appear.

Also, the mythology is quite ordinary. The flashbacks, though well-produced, are forgettable, as is the subplot involving its trip to Walter's house.

In the end, despite some horrifying moments (the spider in the tub and under the bed, the brutal bites and the visceral effect of the poison), it feels like it was too much teaser for just a few unsatisfactory money shots.

"Itsy Bitsy" wastes a lot of time with banal drama and unimportant characters and ends up not taking full advantage of the excellent practical and make up effects.