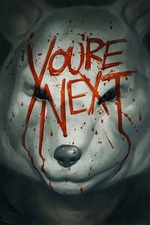 You're next is a film which aims to be very suspenseful and incredibly gory with an unbelievable quick twist. However the films execution falls slightly flat.

The film does nothing different to keep the viewer engaged, the set up is bland. Though the conversations each of the couples have introduces their unique dynamic, there's no hook. Therefore when all of the couples are brought together in the cabin, there's a sense of general apathy. This is further led by the flat acting of the characters which fails to convey any semblance of emotion, which adds to this bleak aesthetic.

The film soon jumps into the gore. Admittedly, each of the deaths are unique and just as clever. However, the deaths aren't as powerful as they could potentially be due to the lack of empathy or connection with any of the characters.

I felt as though the film makers thought that the reveal of the killers and their motives were incredibly shocking. It is in fact the opposite, the reveal is a fizzle.

The female protagonist shows any sort of development and somewhat carries the film as she has the ability to fight rather than flee when her instincts kick in. Watching her is intriguing and interesting as the film now becomes out this female lead protecting herself.

All in all, this film has a lot of potential but the former half of the film really let the gory latter fall flat. This is proof that whilst not many people care for the back story and set up of a gore fest, it is important for it to be powerful.