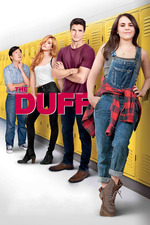 For a moment in my life I came to think that The Duff is one of my favorite movies of all time when I was going through my average pseudo cinephile stage where I would go by Sunday movies and deify them as if they were the best in the world and the ones that were actually relatively good I would end up giving them crap. But now when I watched it again with this vision that I have now, I didn't feel that it was a movie that disappointed me like my past self, well yes, I ended up replacing it with The Edge of Seventeen which is obviously a delight from head to toe. Well, not to make this too long, let's start with my random review.

Teen "romantic" comedies are one of the most clichéd, overblown and formulaic genres out there. Every once in a while a gem pops up: .... Submarine for example... but it's very rare.

DUFF does not avoid the formula of these films. It fits neatly into a certain subgenre, which I would title with a long sentence full of hyphens, but I feel like that might be a spoiler. But the spoiler isn't really necessary, since ten minutes or less into the movie it's clear how it's going to end.

That said, you might be curious as to why I gave the movie three stars. Well, even if it sticks to that sub-genre I mentioned but didn't title, it's still hugely entertaining, and much funnier than the typical teen romantic comedy. It seems incredibly self-aware, despite the fact that it never mentions the clichés to which it conforms. It's surprisingly witty most of the time, and makes a few more statements than the average film in this genre.

However, much of the film's charm is due to the always wonderful Mae Whitman and Robbie Amell, who have extraordinary chemistry.
To put a but, many of their interventions are not smoothly done. Despite their semi-perspicuous intentions in the first and second acts, in the last act the characters resort to long overdramatic monologues that could easily become tumblr posts.

She is not what I would classify as a traditional DUFF in the least, nor does she deserve to be, but she plays this role superbly. Her attitude and covert sadness are representative of many who have fallen into the introverted machine known as the Internet.

The DUFF seems like a sort of Easy A simplified. Similar genre, not as smart and not as engrossing. But it's still very good. I would recommend it to many, despite being so unoriginal. It's a fun experience, something to sit back and laugh at.