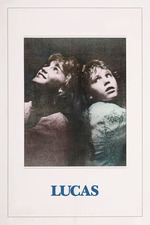 Thankfully I don't have to feel weird about enjoying this movie anymore.

I say that as there was a time where people believed the accusations that while filming this, Charlie Sheen did some heinous things to Corey Haim; Haim wasn't around to confirm or deny, so their validity was in question. This claim was made by Dominick Brascia, a radio DJ who movie fans would best know as the fat kid who was killed in the beginning of Friday the 13th: A New Beginning. Well, after Dominick passed away a year ago this month, I discovered that Haim's mother claimed the one who molested her son was... Brascia himself. An ugly situation, but I would rather think that Sheen (for all of his faults) wouldn't do such a thing.

Anyhow, I was happy to see this great teen comedy/drama again and not have such horrible moments connected to it. Haim played the title character, a genius 14 year old who (while never identified as such in the movie) seemed to be “on the spectrum” as he was blunt and had poor people skills. He is also “weird” as he likes insects; he captures them but does release them after he examines those critters... that will be “bonus points” for some. One summer, 16 year old Kerri Green moved to town; they meet one day and well, Lucas took a shine to her. 14 year old me back in the day understood why. They become friends but he wishes for something more... & those feelings aren't reciprocated. Instead, she falls for Sheen's Cappy, a football wide receiver.

One great aspect of the movie is that Green's and Sheen's characters are not vilified because they start to become an item and Lucas is rejected as a boyfriend; likewise, he is not painted as a villain for reacting to this badly, although at times he does say and do some hurtful things. Heck, Cappy considers Lucas to be a pal as they've helped each other before and defends Lucas against some of his teammates, who love to torment him; is it a surprise that one of them was Jeremy Piven? Even back then he portrayed a certain type of role. Other familiar faces include Courtney Thorne-Smith and in her film debut, one of the Internet's favorite actresses: Winona Ryder.

In addition, there are several scenes which are long takes and it's just two characters talking to each other... it is never boring or dull; instead, it's always interesting as they converse and reveal their feelings, or talk about their past; all of this is in a natural fashion instead of feeling phony and contrived. The movie is not unrealistic or ridiculous when it comes to looking at life as a high school student. There are bullies, cliques, fleeting romances, false bravado, and all the rest. For me at least, the movie was relatable.

The movie has its 80's moments (including a homophobic scene; not groovy, even if the character was punished for accusing someone of being gay) but otherwise is timelessly charming to me as the leads are not cliché and it is simply a nice movie to watch, even with some bittersweet moments; there is a heart-wrenching moment or two to boot. This is why I am glad what was claimed about off the set chicanery is apparently not true.