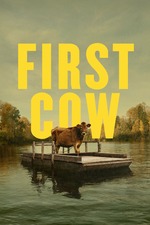 When one considers the cinematic history of the American western, no one ever considers the values of each film and what they project. Most discussions are about the heroism and success of an American cowboy such as John Wayne or Clint Eastwood. Before superhero cinema and buddy cop films, westerns were the films that represented traditional ideas—such as family and patriotism. There are only a few films in cinema that are bold enough to be different than the norms of the genre. Kelly Reichardt’s First Cow is one of those cases. In First Cow, Reichardt provocatively examines the corruption of American capitalism in a beautiful story about a relationship between a quietly reserved cook and a considerate immigrant.
At the motion picture’s initiation, Reichardt creates a prologue that involves a woman—a brief role by Alia Shawkat—and a dog roaming around a rural territory in Oregon. The dog walks to a ground of dirt as he digs the ground to discover what is underneath. Once Shawkat’s woman notices the dog’s action, she demands the dog comes to a halt. When Shawkat views the ground, she is curious enough to dig underneath. In this prologue, Shawkat discovers two skeletons right next to each other. Reichardt crafts a mystery out of this sequence as viewers question why there are two skeletons there. When the film transfers back to 1820, audiences encounter Cookie Figowitz with a group of fur traders. During his experiences with these men, they respond to Figowitz with disdain as he cannot find food for them. As the travel progresses, Figowitz begins a friendship with Chinese immigrant King Lu—who is on the run for murder—as they speak of their stories and aspirations. Figowitz aspires to create a hotel or bakery in San Francisco while Lu discusses his travels as an immigrant in the country. The performances between John Magaro and Orion Lee are powerful without presenting any exaggerated signs of theatrical acting. In these subtle moments, Reichardt creates a charming and genuine bond between two people of distinctly different stories.
As the motion picture continues, First Cow is more complex than a friendship narrative as it involves the incorporation of the first milk cow as American capital. When Figowitz and Lu hear of the cow, Figowitz considers the idea of stealing the cow’s milk for tea. They later decide to steal the milk, so they can make a profit from baking cookies and biscuits. Their criminal actions are less about excess and more about poverty and survival in an alienated world where the prosperous individuals—such as the cow’s owner Chief Factor—dominate. Reichardt’s examination does not romanticize these figures like other films would as she identifies Figowitz and Lu as lost souls. Several aspects of this narrative might remind devout moviegoers of Robert Altman’s 1971 masterpiece McCabe and Mrs. Miller—a western that also involves a human bond and confronts American capitalism. The late René Auberjonois—an Altman alumnus—even appears in First Cow as a man with a raven. A bitter blogger on the internet might criticize Reichardt for seeking inspiration from one of Altman’s masterpieces, but they would be wrong in the sense that Reichardt updates the idea with visual creativity and modern thinking. Like Altman, Reichardt is not timid about critiquing America’s faults in response to minorities and the impoverished. These critiques are not sanctimonious, but they exhibit a just execution if one removes themselves from media reinforcement.
Unlike this year’s highly overrated The Vast of Night, First Cow is an arthouse film that coalesces aesthetic flourishes with contemporary themes. Due to her courage as a filmmaker, Reichardt develops a naturalistic work of art that is symbolic of modern America in the way the elite ignores people of a lesser status economically and racially. In a year when films mostly disappoint, it is refreshing to witness an impressive piece of filmmaking unfold into a sociopolitical commentary.