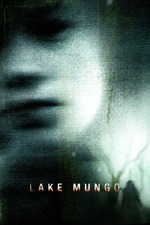 Offhand, I recommended this movie to someone as "Twin Peaks trapped in a shattered instant of grief," accidentally illuminating the connective tissue between all my own dislocated thoughts on the movie. To some extent, Lake Mungo is a Twin Peaks remix, hard not to recognize in Alice Palmer's enigmatic smile, her quack therapist, her ominous visions, her illicit sexual history; the layers of her secrecy peeled back and laid bare as the movie unfolds. Twin Peaks is about grief; not the frenzy of loss but the paralyzing stillness after it that can freeze a town in agony as easily as it can a family, as easily as it can a person who is not ready to lose. Lake Mungo is, too.

But as we are walked through one Palmer house thinking of the other; when we see the dead girl's tidied room and wonder about the other's; when we see one girl named Palmer framed in a photograph and think of the other; when we feel her loneliness, her resignation to pernicious forces taking unspeakable interest in her; when we think of how Twin Peaks was never supposed to reveal who killed its Palmer girl, how we never quite learn how Lake Mungo's Palmer girl died; when we think of how Alice's brother fakes his sister's presence in the home and how James cries at a photo of Laura 25 years since her death--then it seems that grief is the absolute terror of the future, the absolute terror of there being any life after the one that we knew.

And then to be wrong.