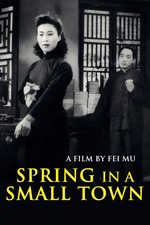 Often lauded as one of the greatest Chinese films ever, Spring in a Small Town is a small, quiet and economic achievement. The film itself is slight and often times feels like something more in line with a daytime soap but then again, that doesn't work against the film. If anything, and for whatever reason, the film just works, even with this in mind.

In a family home nearly destroyed by the second Sino-Japanese war, Yuwen (Wei Wei), the Wife, is trapped by duty to an invalid husband Liyan (Shi Yu), growing further and further distant from the man she married and his young sister Xiu (Zhang Hongmei). Into this persistent dreary boredom comes Zhang Zhichen (Li Wei), a doctor, friend of Liyan and Yuwen's former sweetheart. Slowly but surely, these four individuals descend into various love triangles that leave them each torn between love and loyalty.

Spring in a Small Town really is that slight and really does hark that close to just about any episode of anytime daytime soap. Though never quite as bold, exaggerated or ridiculous, this small cast of characters acts in much the same way. Love triangles develop and create unspoken conflict within and between characters, reactions are suitably over the top, and all the while, we are left to watch our cast almost overact. At the very least, it is clearly obvious that they are acting.

All this said, Spring in a Small Town is such an economically sparse and restrained film that it never feels quite so overwhelming nor so ridiculously exaggerated (ie stupidly unwatchable). Everything here is deliberately done, from a character's expression, their choice of words or the simple narration throughout. It makes the film feel much more in line with a play and that idea is what keeps my interest. I won't lie, the slow, plodding rhythm of the film is entirely deliberate but this will either make or break the film for you.

Refreshingly, the film is (somewhat) self-aware, free from a deeper message and void of politics. Though the war appears and has left an obvious mark (noticeable in Yuwen's general malaise and her sweetheart's long absence), it is, for all intents and purposes, just a film made for its own sake. There is a constant, knowing narration that does little more than recount what's on screen but its stream of conscience nature is equally, refreshingly superficial.

All in all, Spring in a Small Town is a very different kind of Chinese film. It exists for its own sake without politicisation or propaganda. It carries no message and is ultimately little more than a quiet melodrama. Deliberately constructed, it won't be for everyone, even at a brisk 90 or so minutes, but it shows a different, less introspective side to a cinema otherwise dominated by heavily and noticeably motivated films.