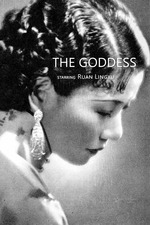 Known to be one of the best films from China's cinematic golden age, The Goddess is a story of motherly devotion in the face of social injustice.

An unnamed woman (Ruan Lingyu) spends her nights working as a prostitute to support herself and her newborn son Shuiping. Hiding from police in the rooms of a boorish gambler named Zhang (Zhang Zhizhi), the mother unknowingly becomes entangled with this man. Claiming her as his property, Zhang controls her life. Fed up, she and her son run away but are soon found by Zhang. Knowing she cannot hide, she begins to hide money so that she can send Shuiping to school. When parents learn of her profession, they complain to the school, forcing the principal to investigate. Seeing her devotion and love, the principal finds no reason to expel the child but is forced out of the school by socially conservative opponents. When an incident occurs separating Shuiping from his mother, the principal promises to raise and educate Shuiping, thus offering a better life away from prejudice.

That may seem like a long explanation and one filled with spoilers but honestly, I don't think it matters. The Goddess is a classic melodrama with clear beats easily identified miles away. Therefore, the crux of the film comes to our relation to and sympathy for the unnamed mother.

With what essentially amounts to four characters, of which only one is even partly developed, the film belongs to Ruan Lingyu. Viewed entirely as a sympathetic character, Lingyu's unnamed woman is played with a worn and weary exasperation. Without dialogue, the film is broadcast entirely in her actions and body language, something with which she excels. Tired of the only profession available to her and thus the prejudice that comes with it, she wears a tough exterior that is noticeably scuffed and finally dented in her moments of privacy. Lingyu brings such a weary yet determined physicality to the role it's hard not to feel sympathy for her as she struggles. Adding to this are her moments of lively defiance. The film builds up to them and lets them play out in moments of exhilarated desperation rather than explosive action. Never totally beaten into submission, the unnamed woman is nevertheless little more than a machine going through the motions.

Outside Lingyu though are three dependably fine but otherwise flat performances. The son is little more than a catalyst and plot device, the principal is the solitary sympathetic voice as well as the voice of reason while the gambler is an almost cartoonish villain. Zhang, in particular, wanders off into the laughable as he pulls unseemly faces that only bad guys of the early cinematic era wore. Regardless, the three men here are necessary aspects of the film, both as plot and as voice.

Being one of few films to sympathetically view prostitutes at the time, the principal's insistence on abandoning social conservatism tp uphold the belief that education is open to all seems almost outlandish. Yes, this idea might seem normal to us now but for a child carrying a family reputation such as his, Shuiping is lucky not to be any more ostracized than he already is. Even so, the film itself is willing to admit the boy would be better served to live a life free of this burden than to try and take on the world with it.

The Goddess is a fine film and one that I was excited to see. It is undoubtedly good but feels rather similar in far too many regards to its contemporaries from Hollywood and Europe. I suppose the simplicity and ease of this melodrama are easily transposed between just about everyone but it's hard not to feel a little disappointed that there was nothing I saw or felt that was uniquely different from anything else. Even so, The Goddess is a delight to see.

Spring in a Small Town