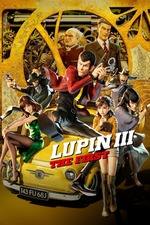 Ordered the official Blu-Ray from Japan and watched with English subs from online.

Hot dang. As per expectations, this is some of the best-looking CG animation I've ever seen; it's an incredibly compelling case that anime can translate to this medium, even for hand-drawn fanatics like me. And of course, to employ a standard cliche: it feels like I could put almost any frame from this movie on my wall.

The character designs are instantly memorable and delightfully tasteful; the faces and movements often embrace that cartoonish anime expressiveness, but they also feel extremely real and tangible from the get-go. The textures and details here are out of this world, from Letitia's beautiful bright blue pupils to Lupin's fuzzy hair and the ripples of Fujiko's green dress. If there's anything to praise above everything else, though, it's gotta be the lighting. If these models had been covered in flat, sanitized stage-lights like the average Illumination movie, they might not have looked particularly impressive. But the way the sunlight gleams on every character's hair and shines on the ocean, the dynamic shadows and extreme contrast in every corner, the pinkish haze of the city streets in Paris and the warm glow of each electric bulb...it's pure magic.

It helps that the movie is fun as ever, too. The only thing that has felt this Spielbergian in the past decade has been The Adventures of Tin-Tin - which might be the closest comparison this movie has. It always feels good when movies for children have the guts to include guns and vaporizing and Nazis, right? This one even has one character telling a Nazi to "burn in hell." So that's pretty cool.

Not to mention, the action is rollicking; much like the character designs, it strikes a perfect balance between tangible stakes and cartoon absurdity. At one point, Goemon literally slices a cargo plane in half, and it works. Also, there's a whole sequence in the third act that is basically just a total ripoff of The Last Crusade? And I liked it anyway?

So yes, this movie is awesome. It definitely could've benefited from a longer runtime - and maybe devoting some extra scenes to Lupin rather than the villains and sci-fi exposition - but boy oh boy, it feels good to see some current animation that actually feels fresh and exciting. I really, really hope this gets a full US theatrical release - and many sequels in the same style.