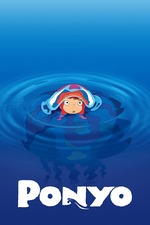 In February, Japan's greatest animator, and one of my favorite directors, Hayao Miyazaki, after years of off and on retirement, releases what will sadly be his final, final film, The Wind Rises. However, until today, I had yet to see his latest work, Ponyo. Up until The Secret World of Arrietty, a film that Miyazaki produced by did not director and I have yet to watch, all the US releases and dubs were done by Disney, who had some hits(Spirited Away, Nausicaa, Kiki's Delivery Service) and some misses(Princess Mononoke, Castle in the Sky). Its not that dub is inherently worse than subtitles, its that often Disney will just get celebrities to do the voices, which doesn't always work. However, Ponyo is probably the absolute worst offender Disney has every done, going as far as to shoehorn the younger siblings of Miley Cyrus and the Jonas Brothers into lead roles. While the film itself is fine, its hard to really rate this film without taking into account a less than stellar dub.

Deep in the Pacific Ocean off the coast of Japan, a little fish named Brunhilde, lives trapped by her father Fujimoto(Liam Neeson), a wizard, who's disgust for human's treatment of the ocean, has lead him to go off land into the ocean, keeping his fish children close by and safe. However, Brunhilde longs to see the world, and when a strong current sweeps her towards the shore, she is discovered by Sōsuke(Frankie Jonas) a five year old human boy who decides to name her "Ponyo", and take her for show and tell. Sōsuke's mother(Tina Fey) works at a retirement home, and his father(Matt Damon) is always at sea, so Sōsuke is often alone, so Ponyo becomes the center of his attention. Ponyo's love for Sōsuke, and magic powers, allow her to become a human(Noah Cyrus). All the while, Fujimoto is on the lookout for his missing daughter.

Like every Miyazaki film, Ponyo looks beautiful. Though not as intricate or mature as Spirited Away or Princess Mononoke, Ponyo's storybook inspiration(Miyazaki has compared it to the Little Mermaid), makes the bright colors and whimsical designs are perfect for this surreal children's story. Unfortunately, the film fails to have a decent story to match it's visuals. Unlike a film like Totoro, which thrives on just being a slice of life film, Ponyo felt like it had too much of a plot to be slice of life, but not enough to be really good. Also, in the case of this viewing, I found that some of the voice acting was just too inconsistent. While Frankie Jonas was bland by tolerable, Noah Cyrus as Ponyo could be absolutely grating at times, and really brought the film down for me. Other casting choices like Tina Fey and Matt Damon as the mother and father could have been great, but since the material mostly focused on the children, there was very little for them to do except be typical mother and father characters. However, some performances did grow on me. While Liam Neeson would not have been my first choice to play a David Bowie-esque wizard, his performance grew on me as the film went on, and Cate Blanchett as the queen of the ocean was quite the inspired casting, though unfortunately she gets very few lines.

Despite its flaws, an average Miyazaki movie is still an above average movie overall. While Ponyo may be one of Miyazaki's weakest efforts, its still a fun and harmless children's movie, that is worth a watch for younger audiences, and those who are a fan of the director's prior work.