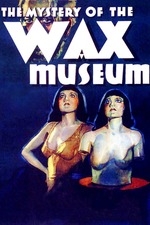 Wax dummies are creepy. They saunter right into the uncanny valley, even more-so then ventriloquist dummies or dolls. Those objects usually exaggerate the human form. Wax mannequins, meanwhile, mean to duplicate it perfectly. This makes them creepy as fuck. So it’s no shock that numerous horror films have meant to capitalize on that creepiness. “House of Wax” is obviously the most well-known example but that film is actually a remake of an even earlier film. “Mystery of the Wax Museum” was thought to be lost for thirty years before a copy emerge in the sixties, so that new generations could enjoy the originator.

In 1920s France, a proud, genius wax sculptor shows off his museum to some very appreciative critics. The man has a deep personal relationship with his artwork, talking to his sculptures as if they were people. Immediately afterwards, the museum’s investor tells him they are loosing money. In order to regain the lost funds, he plans to burn down the museum and collect on the insurance. The sculptor is horrified by this and attempts to stop. When he can’t, he stays behind inside the museum, watching his beloved creations burn. A decade later, a new wax museum opens in New York, operated by the same man, now calling himself Mr. Igor. Though confined to a wheelchair, and with horribly burnt hands, he still directs the wax museum. Meanwhile, bodies begin to disappear from the morgue. Hotshot reporter Florence Dempsey quickly suspects the two cases might be related.

“Mystery of the Wax Museum” has, undoubtedly, been overshadowed by its later remake, “House of Wax.” The remake follows the general outline of the original quite closely yet the two films are ultimately very different. As the title promises, “Mystery of the Wax Museum” is more of a mystery. “House of Wax” focused more on the story’s morbid aspect while “Mystery” is more about characters sleuthing around, investigating leads and trying to unravel what’s happening. “Hosue of Wax” focuses more on the mad sculptor and the girl he intends to turn into his new Marine Antoinette. The main character of the original, meanwhile, is the hotshot lady reporter on the case’s tail. The only time “Mystery of the Wax Museum” is a full blown horror flick is the scenes in the morgue and the very end.

What truly keeps “Mystery of the Wax Museum” afloat and makes it so charming is its cast. Glenda Farrell plays Florence Dempsey, the fast-talking, quick-thinking reporter at the film’s center. Florence is friggin’ awesome. She’s brass, fearless, heads straight into danger, and always has a snappy one-liner up her sleeve. Farrell’s flapper-attitude might not be for everyone but I was absolutely charmed by her. Building the film around her was a wise decision since she steals the whole show. She’s certainly more interesting then Fay Wray as Charlotte, the movie’s damsel in distress. Charlotte stands around, being desired by the various men in the plot. Igor wants to encase her in wax while Jim, her fiancé, just wants to marry her. Wray at least gives her famous lungs a work-out. While Vincent Price was obviously more memorable in the remake, Lionel Atwill isn’t bad in the same part. His mad proclamations concerning his art are quite entertaining.

Uncharacteristic for the time period, “Mystery of the Wax Museum” was shot in color. Two-strip Technicolor to be exact. The color is washed-out and quite ugly by today’s standards, everything appearing in shades of sickly green or beige. As someone who loves the look and feel of horror films from 1930s, I still found a lot to like about the visual presentation. More then once, atmospheric shadows are thrown on the wall. There’s very little music, giving the entire picture an eerie, creaky feeling. I love the set of Igor’s laboratory, the winding staircase above the cauldron of wax or the harsh expressionistic angles of the room above. As the film was made in 1933, it predates the Production Code. So the script is saucier then you’d expect. Florance, at one point, asks a cop about his sex life. A minor character is identified as a junkie and bootlegging is a major plot point. All of this adds to the movie’s unique charm.

“House of Wax” is a smoother and better constructed then “Mystery of the Wax Museum.” Yet I’m a fan of the original and would put them on about equal footing. Mostly thanks to the unique feel early horror films have and the boundless charm of Glenda Farrell