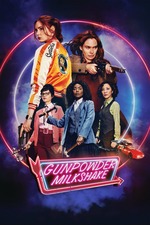 So I liked this quite a lot.

Badass women doing badass things, but it was clear why they hired Karen Gillan -- the one fight scene where both her arms are immobilized and she has to use her long, slender frame to fight. Which was coincidentally my favorite action scene of the film.

They should have had Angela Bassett and Lena Headey kiss already, there was OBVIOUS chemistry and unspoken past between them specifically.