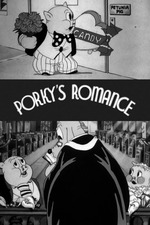 Unbelievably mean-spirited little short where we’re introduced to Petunia Pig. The narration starts off with a sarcastic introduction of Looney Tunes’s new breakout character. She stands onstage in front of a backdrop covered in Leon Schlesinger’s name (good joke!) and sort of just does Porky’s stuttering shtick before revealing that she’s also a jerk. Works for me! I don’t think Termite Terrace particularly liked Egghead either, y’know? I don’t really need them to like their characters. Especially not in the fucking 30s.

The short is mostly just Porky excited to marry what must’ve been at the time the vainest and laziest character in cartoons while she obviously uses him to get candy. Tashlin seems to have predicted that audiences wouldn’t like Petunia so he really dials up the bile. He lets us off the hook. She’s got a little proto Lady and the Tramp cocker spaniel who sucks. There were only about five breeds of dog in the 30s (spaniel, dalmatian, bulldog, poodle, Pluto) and I commend them for not going with the more on the nose poodle here.

I like this version of Porky where his personality is “fat little happy guy who gets bullied by reality worse than Job.” The 30s were a dirty time. Pool halls full of hard men would crowd into filthy theaters to cheer as a pig with a realistic stutter tried to kill himself. Later on Porky would get sober and learn to be alone with himself but for the time being he was an empty shell continually set adrift by cruel cosmic forces outside of his control, looking to fill the hole with something, anything. A few shorts later he would go on a historically significant duck hunt and hit rock bottom. There was nowhere to go but up.