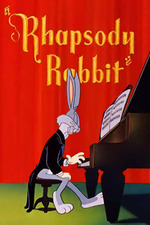 Hadn’t seen it in years but was pleasantly surprised! Freleng’s ultimately a gag man and so it works in his favor to strip the story away and just have Bugs play piano to a horrified audience. He shoots a man for coughing. Shoots him dead. Hundreds of witnesses. Nobody screams or even leaves. You think you know power but you’ve never seen power like that. What Bugs did for the neighborhood, you can’t really understand.

Some all-time great reactions from Bugs in this. If I was a younger man, my ears unblocked by age to the siren song of the meme, I would maybe edit that shot of him playing piano with his toes into that meme where the Chipmunks are getting various qualities of head. But I’ve got my future to think of now.

It’s always nice to see Bugs in the role of aggressor. I tire quickly of put upon Bugs. I don’t need him to be a good man. I have good men in my life and in my mirror. Let the rabbit shoot people and trap a mouse under a piano key cover with a lit stick of dynamite. Bravo.