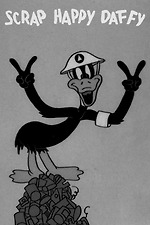 Tashlin’s sort of a blind spot for me, I can admit that. I’m a big enough man. He’s got a great Daffy though. Really, everything you could want from Daffy. All the manic energy of Clampett’s Daffy but just reigned in enough that he can focus on his tasks. This Daffy is me from that week in middle school when we had the medication just right before we moved and had to start over again.

Lots of great gags in this alongside a lot of wartime propaganda, most of which ages poorly enough that it becomes historically interesting. Hitler shouting that Daffy is a “non-aryan Duck” is shocking and raises... some questions about Daffy’s identity. Feels almost like a modern cartoon satirizing wartime cartoons, but it’s just the genuine article.

Something here that strikes me is the nazis shooting a torpedo at Daffy’s scrap heap only for the front of it to open up and reveal a nazi goat. Great gag. And you’d think it would end there but you get, like, four more minutes with this nazi goat. It becomes the primary antagonist of the short and even bests Daffy hard enough that he has to get scolded by the ghosts of his pilgrim ancestors like in Angels in America. Did Tashlin try shit like this in his live action films? Impossible to check.

Game ball goes to Art Davis here who animates Daffy like he’s made of cooked noodles that have been shot full of bull adrenaline. Daffy’s ancestors are rendered in a simplified pre-UPA style that works beautifully. But the star of the show is this nazi goat goose-stepping with cans visibly rattling around in its stomach. This is the melodrama opening up deeper emotional truths Guy Maddin was talking about, only rendered visual. And the truth is that this goat just ate a bunch of cans.