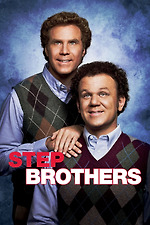 The curse of Will Ferrell is that the least funny try-hards on earth tend to glom onto his work and overfarm it until the soil is salted and barren. It makes a lot of his stuff hard to rewatch when most of the big comic moments have taken on a life of their own as context-less AIM away messages. It’s a testament to his talent and charisma that I not only don’t blame him for this, I am mad about it on his behalf. This is an especially hard to track movie because so much of the script found it’s way into red flag OKCupid profiles. But even in 2008 a lot of this was Ferrell and Reilly muscling through dialogue that should’ve been sharper. It’s a shame because when it lets Ferrell and Reilly be the weird freaks we know they are it hits harder.

The clearly improvised monologue from Richard Jenkins about not losing your dinosaur is great, especially because you can see him surprise himself when he ties it all together. Maybe the best meta joke in the entire movie is watching Jenkins and Steenburgen try to make this material work from an acting perspective. It’s an impossible task and you can tell they know it but they’re having so much fun trying anyway. It’s very appealing! Honestly the more interesting movie here is the one happening on the sidelines with these parents trying to make it work as the last two human beings left in a world of grotesque, hateful clowns.