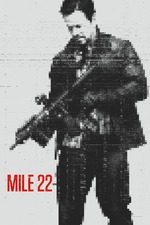 The plot is plain.  You know, the traditional special-agent/big-gun stuff.  But Wahlberg carries the weight of the lead role aptly.  In fact he one-ups his stereotyped alpha male caricature by firstly bring a fairly viscous a-hole and, secondly, by delivering all his lines without pausing to take breaths between sentences.  The speed of his dialog is a throwback to his Marky Mark beatboxing.

Berg seems hell-bent on delivering action in a big way here.  And he does.  He’s dropped all the true-life, news-story baggage from his story (which his last few films delivered) and committed to start-to-end action scene.  Iko Uwais and Lauren Cohan are significant action leads who are as important presences in MILE 22.  I hope we see more of Uwais in North America because he’s great in THE RAID as well.

MILE 22 doesn’t has have a lot going on beyond action and its watchable cast, but doing a genre right and robustly has never been a bad thing.
B+

The Spy Who Dumped Me