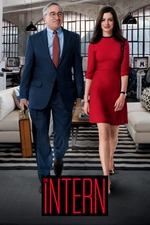 Truly horrifying to see the names of two of the three Workaholics in the opening credits. I was so tense waiting to see if the long haired Workaholic was going to jump out. Yet in the end, that sense of extended terror waiting for the third Workaholic was far scarier than it would have been if he actually showed up.

(This is pretty great besides the Workaholics guys. De Niro’s best performance since what, Jackie Brown? Hathaway is terrific too. I found it immensely charming, even if it doesn’t match the high point of De Niro’s first act boner)