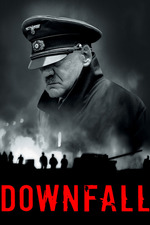 part of my scavenger hunt #61: watch a war movie that is told from the viewpoint of those who lost the war.

That was the most accurate task of my Scavenger Hunts so far. Downfall is a sophisticated piece of art. The acting is above any possible expectation, the meticulous details are so well putted, the dialogues and scenes are breathtaking. That was the literal first time in my whole life when I actually thought of Hitler as a human. I could never see him as a human being, and I guess the worst part of all this is that, well... he was one.

I spent the entire movie thinking about how he deserved to have a way worse downfall, but at soon as it ended I can only think about how I wish humanity had never had to go through something so outrageous.