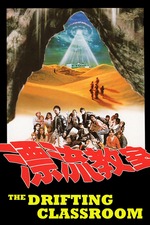 “The best time of my high school years

My name is Arthur Johnson, and I was in the movie. I played the role of Kenny. It was a great film from beginning to the end. Even though special effects wasn't that great back then. But all the slob, mud, sand, and fire, we had to endure. I think was well worth it. Especially the huge cock roaches we had to battle in the classrooms. I'm glad I had that experience of doing that movie, because I am currently living in California, trying to revamp my acting career. Even though I am in a 14 yr drout. lol I don't think anybody who was in the movie is going to read this. Since it was in 1987, and filmed in Japan. A lot of people in the states never even heard about it. In american, the movie was called Drifting Classroom. I don't know why everybody post the Japanese translation. It was also an honor to work with Troy Donahue, and all my other high school classmates.

Arthur started in the entertainment business as an actor, at a very young age, in Japan; where he lived for 10 yrs. He was in a movie called "The Drifting Classroom", where he played the role of Kenny. Following his role. He was in a few commercials, media appearances, and did several dance shows.
Upon moving to the states. He was still unsure about pursuing a career in acting, despite being thrown into the spotlight at an early age.
He settled in Kansas for several years, where he started modeling, which led to a numerous amount of talent shows. He decided, that was his calling. He applied for an acting school in L.A. California called "American Academy of Dramatic Arts". A highly accredited school for producing academy award winning actors. He auditioned, got accepted and moved to California.
During and after school. He was involved in a numerous amount of plays, and landed his 1st syndicated commercial. He's done game shows, talent shows, web-o-sodes, short films.
He wrote, acted, directed, and produced his 1st comedy play. He received rave reviews, and a writer was born.
He has written over 40 sketches, plays, commercial spoofs, ranging from 2 to 30 min. He is currently writing on a comedy screenplay, to hopefully see it on the big screen.
He has his own unique style of comedy”