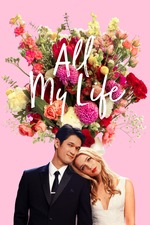 Jessica Rothe turns in a breathtaking performance that manages to elevate an otherwise fairly generic and on the nose script.

Harry Shum Jr. offers an inconsistent performance - at times great, at others average.

Some nice song selections and a couple of interesting cinematography choices. An overall heartfelt, emotional and tragic story. Rothe tries her hardest to pull you in, but the script is so painstakingly cliche and average at times that a lot of emotional beats don't land. The same applies to a large chunk of the comedy.

Obviously, this is based on true events, but I still question the need for a $20,000 wedding given the circumstances - especially the way in which the film explains (or, more importantly, doesn't explain) such need.

Back to the Future