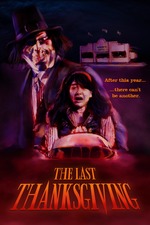 I always get a little apprehensive when horror movies, especially slasher movies, get advertised as an "80s throwback". Sometimes, I come across movies which use the phrase "80s horror throwback" as an excuse for lazy writing and characterisation, bad acting and an uninteresting, bland plot. To me, horror should always be transgressive rather than regressive, and that's not me saying that I hate fauxploitation and retro throwback horror, because to be quite honest when it's done with heart, it's one of my favourite things. However, more recently I've been seeing "throwback" films that are created as a resistance to the increased public presence of minority voices and modern topical issues in horror in a volatile post-2016 world; films which yearn for a fantasy period where everybody was white and you could be as horrible to minorities as you liked.

Which is why The Last Thanksgiving pleasantly surprised me. It's formulaic, as slashers are, and there are parts of the film which I think weren't fully developed or given a conclusion that needed that extra attention, but... this one really did surprise me, in a very good way. It's an '80s throwback movie in that it takes classic slasher flick plot elements and applies some quite interesting and fun modern sensibilities to them. It's also just a very charming film which a lot of love was clearly put into by everyone involved. The film was very obviously made on the cheap, and I mean that in the most endearing way I can, because its home-grown aesthetics are part of what got me hooked on the movie in the first place. It's also got some quite shocking and brutal gore, with some really impressive FX work, some of which I'm not even sure that I want to spoil in this review. Every death scene is uniquely disgusting and bloody, and there's even a healthy bit of self-referential humour about how the killers make one-liners before slaying their victims.

I think the biggest thing which surprised me about The Last Thanksgiving is how clever it is. I'm not just saying that because of the interesting ways that it addresses and deconstructs traditional slasher tropes and clichés; I'm more talking about the interesting way that the plot connects with the holiday of Thanksgiving itself. Anyone can make a slasher movie set on a holiday, but to truly engage with that holiday's semantics and connotations is the thing which really makes your film stand out. Writer Erick Lorinc clearly intended this movie to portray the awkwardness of Thanksgiving as a holiday, and the reasons that we still come back to celebrate it every year. Is it really about being thankful? Is it really about spending time with your family and showing them that you care? Or is it tradition for the sake of tradition, without caring about the cruel irony of its origins? It's a holiday you hear about more people dreading than being excited for, a holiday that nobody really wants to write songs for, or create movies about, because it's just not that interesting, and yet people are shamed for not enjoying it, being told that they "aren't being thankful". The killers in this movie target people working on Thanksgiving, considering them to be taking their families and loved ones for granted, but somehow they've never considered that you don't have to celebrate Thanksgiving to love and appreciate your family. Somehow, they've never considered that maybe they still kill just because it's what they've always done, every year, in service of spiteful ancestors who thanked the natives who fed them, whilst calling them savages and building mansions on their graves.

Maybe I'm reading too deep into a movie where people are turned into the consistency of gravy in an acid bath which is referred to as "the Gravy Pit"?