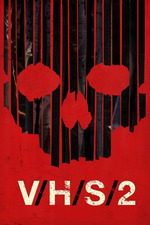 Thoughts on individual segments as follows:

Wraparound: Tape 49 (dir. Simon Barrett) ⭐⭐⭐1/2
Finally! A good wrap-around! And it's... actually quite creepy? Properly delves into the "forbidden analogue media" angle that this entire series is about. Suggests more than it shows.

Phase I Clinical Trials (dir. Adam Wingard) ⭐⭐⭐⭐
Dude sees dead people! For every miss Adam Wingard puts out, there's always a hit - and this is the hit that follows his wrap-around from the previous film. Tons of fun, and quite scary. Not the most original concept for an anthology horror segment (see: Body Bags) but who cares if it's just that fun?

A Ride in the Park (dirs. Eduardo Sanchez, Gregg Hale) ⭐⭐⭐1/2
Very fun GoPro horror short - I mean, how can I not love the concept of a zombie movie from the POV of a mindless zombie? Sure, it's practically just the basics (other than its bleak Jordy Verrill-esque ending), and I wanted something more - perhaps a little more consistent energy? This is meant to be a ride, after all, not a leisurely jog. Still, it's a lot of fun.

Safe Haven (dirs. Gareth Evans, Timo Tjahjanto) ⭐⭐⭐⭐⭐
Damn, none of you were lying when you said this one was A LOT, huh?

Slumber Party Alien Abduction (dir. Jason Eisener) ⭐⭐
Scary aliens, yay! Unfortunately, the scary aliens are wasted on something even scarier... a really annoying segment where the characters are all despicable, you can't see anything through a bunch of dog hair, and then... well, you know what happens to dogs in horror movies, but did they have to be THAT cruel in their presentation? I guess they had to sacrifice something to get a good wrap-around, I suppose...

So yeah. It was good. And it still doesn't make sense that all of these shorts are on VHS tapes, because they're clearly not. I don't care, the segments are often fun enough that I don't really notice.