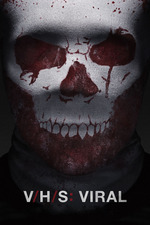 Thoughts on individual segments as follows:

Wraparound: Vicious Circles (dir. Marcel Sarmiento) ⭐⭐⭐1/2
Gives this film a distinctly different feel to the first two - whilst still being very much a successor. Sure, it's confusing, chaotic, and not all of the wild loose ends are tied back up... but the massive scale of its implications still gets through. Also, it answers my question of how a VHS can go 'viral'! And I'm not talking about the tape getting vinegar syndrome. Ew.

Dante the Great (dir. Gregg Bishop) ⭐⭐⭐⭐1/2
I love me a good killer magician! This segment is just a blast - perfectly paced, perfect action, perfect plotting... this should be just the best thing ever; and yet, I do get the feeling that this segment does far too little with the found footage element, and as such it does feel a little lacking when placed within, y'know, a FF anthology. However, it does also very occasionally use its FF format to great effect! This was just an absolute joy, and there's enough negativity out there in discussion of this film already - I don't need to contribute to that.

Parallel Monsters (dir. Nacho Vigalondo) ⭐⭐⭐⭐⭐
A pure stroke of genius. A man opens a doorway to a parallel universe, where he meets a parallel version of himself - who has also just successfully opened a doorway. What could possibly go wrong? I mean, they're only swapping places for fifteen minutes, just for fun; and yet, a lot can (and does) happen in fifteen minutes. Apparently director Vigalondo is known for making absolutely wild things like this, so I'll have to check out the rest of his work; I'm still yet to watch my DVD of Colossal.

Bonestorm (dirs. Aaron Moorhead, Justin Benson) ⭐⭐⭐⭐⭐
I utterly ADORED this. Like, that's kind of a given, it's Moorhead & Benson, but their segment is the one which feels the most "viral video", and plays with the format to the greatest extent. It's some proper scummy Unregistered_Hypercam_2 hyper-edited skateboard trick compilation shit, but like... with sk8r b0iz versus THE SKELETONS FROM TOMBS OF THE BLIND DEAD. I'm not even kidding. Tony Hawk would be proud. This is some unbelievably joyous internet crust, and I can't get enough. I want more. I want a full feature.

I really do not get the hate for this one. I really don't. Like, this is really not deserving of a 1.8 LBoxd average. I get that it isn't really an anthology film about viral videos, but rather just the next entry in the V/H/S canon - and trust me, I wanna see an anthology horror picture about viral internet videos. However, the first and second V/H/S movies weren't necessarily anthologies of cursed videotapes - so maybe I'm just desensitized to the fact that this series is basically just "the found footage anthology show" and am just willing to roll with it. Weirdly, I'm invested in these films! I'm invested in their weird little lore, and all of the bizarre fucked-up shorts that lie within!

I may be the only person on Earth who overall liked this more than the second film. No hate on V/H/S/2 btw... 'Safe Haven' is critically acclaimed for a reason.