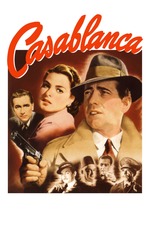 Had to watch for college class, got hour through and was absolutely not feeling it. Gave it a second chance (rewatching from the start) and i have to say that wasn’t bad in the slightest and i was wrong to think otherwise.

This could’ve been really cheesy and outdated but i’m so glad they didn’t go that way. It was a master in making me think - oh god please don’t go down that way it’ll be way too cheesy but it always managed to deceive me. Most of the cheesy part landed with Ingrid Bergman’s Ilsa who i honestly thought was a pretty weak character and outdated af - she literally serves no other purpose but to be several main characters love interests. All of her character, dialogue, beliefs and purpose is built around being someone’s wife.

Weakest part was definitely the flashbacks scenes which again were really cheesy and took me out of the film too much which is why i have problems with Vertigo, there’s just too many cheesy love scenes with overwhelming music playing that takes me out of the film and reminds me i’m watching a film - breaks the illusion, i can’t connect or understand the love between the characters because they always rely on them talking about how they love each other and then kissing with some ridiculous score playing - hasn’t aged well at all and is way too cliche.

Loved the character arc of Rick was my favourite part of the film by far in a film that just isn’t my thing at all but it actually managed to absorb me into the film and keep me watching aswell as the anticipation for the ending which just kept building and building which i loved.

Overall a good film although i definitely cannot see how this holds the title for the best screenplay ever to many people, just how? It’s very well written but the best of all time? please.