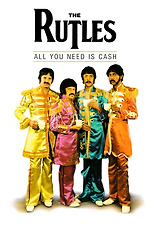 Talk about a hidden gem (well nearly gem, it’s good not great). The world of the Rutles had totally passed me by and seeing as this screened in 1978 and then was unavailable until the late 90s thats no surprise. My wife owned the album but wasn’t even aware of the movie until we found it for a quid in a charity shop. What a find!

This is like a forerunner to the much superior This is Spinal Tap and must have been an influence to Reiner. It plays like an extended Monty Python sketch with little side cameos from the cream of SNL (who felt a little under-utilised if I’m honest). Eric Idle ties it together excellently doing his best Alan Whicker and there’s some fun music cameos primarily Mick Jagger, who seems like he’s having a lot of fun whilst probably being totally off his face.

It’s just a straight up retelling of the Beatles story but silly; the songs are excellent pastiches of the Mersey sound but other than Ouch! and Cheese and Onions they are almost too straight faced, which helps you buy into their fame but passes up a chance to be just, well… funnier.

For a long forgotten TV special combining the wit of Python, SNL and the song-writing of the excellent Innes, this kept me laughing and engaged throughout. It’s definitely a very interesting side chapter for anyone interested in the lives of the Python crew post Flying Circus, an oddity of its time and an absolute trailblazer of the mockumentary style of filmmaking that’s so common nowadays. Well worth a watch even as just a 70s curio piece!