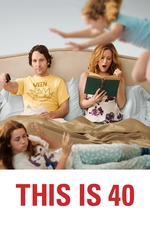 There's so much love I had to give for this movie. If you think I'm a sucker for Judd Apatow films, then I'll tell you that you're right. In the history of his films like "Knocked Up", "Bridesmaids" & "Funny People", This Is 40 delivers the common: smart dialogues, incredibly funny characters, and yes, his two cute kids! I think it's a great idea to put his kids on film because they are carrying the talent, and I wouldn't be shocked if they become comediennes in the near future. Leslie Mann is so funny, and hot even at 40! Paul Rudd is ridiculous, hirsute & gross, and I mean that in a good way. That smile is contagious. The kids, I don't even know where to start! Cameos are a big part of this film: Lena Dunham from HBO's Girls, Chris O' Dowd, Megan Fox & Melissa Mccarthy were amazing. The story is very truthful, I mean every family goes through hard times, it's just that in the movie, they manage to deliver jokes while dealing with them & I liked that. The delivery of lines between the couple is just so f****** funny, the scriptwriter should get an award I tell you.

It's a perfect R-rated family movie for all you guys.