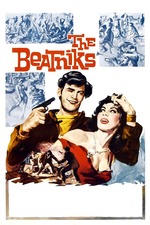 It is easily argued that none of the characters in this film are, indeed, Beatniks. The case for "hoodlums" or "criminals" is much more clear, but that wouldn't look as cool on a poster.

I like this movie, despite itself. It's a story, told very simply by director Paul Frees, about a young, well-dressed thug named Eddie. Eddie gets a chance at stardom overnight, but he can't escape his current thuggish lifestyle with his wild cohorts. Dare Eddie hope for that sweet, six months of stardom before being consigned to the fair circuit for the next ten years?

Everybody in this is dialed up a little bit, except for Peter Breck as Mooney, who is dialed up A LOT. Mooney is the absurdly deranged member of the gang that, in most movies, would get everybody else killed and Breck seems to be having a ball going well over the top playing him.