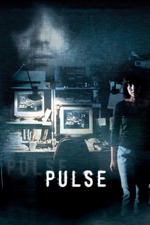 Have you ever seen the painting by Magritte called the Treachery of Images? It shows a pipe and underneath it says "This is not a pipe."

Because it isn't a pipe. It's a picture of a pipe.

A representation of a thing, is not a thing. A painting of a chair is not a chair. It is a painting.

I often hear people ask "Why are we so lonely when we're so connected by the internet?!"

This truth runs to the core of the raw nerve in Kiyoshi Kurosawa's PULSE. Where the dead seek connection with the living and where the living have never felt so alone. A distinction so fine that the dead and the living become indivisible from one another.

After all what is death but complete isolation from life? And what is a world living only through technological representation but completely isolated? Entombed?

Kiyoshi Kurosawa weaves human drama, existential dread and horror together into a masterpiece ghost story that is both unique and culturally relevant nearly 20 years later.

Kiyoshi is the best modern filmmaker in the horror genre. By far. His films don't shock, don't jump at the audience trying to catch them off guard. Like Hitchcock and every master of the past he relies on pacing and control. He slowly drowns the audience in creeping characterisation and thought-provoking cultural criticism. He surrounds the audience in ideas so abstract they cannot be fully grasped and so real they itch at our skin.

Kiyoshi Kurosawa's horror stands just at the corner of our vision. Watching us. Haunting us. Singing in dial up tones. Trying to connect.