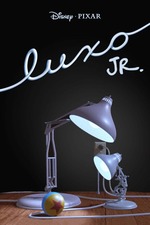 Yeah, it's short (barely over two minutes) and pleasant enough to watch (It's tempting to make an 'I LOVE LAMP' joke, but I bet there's already a dozen reviews on letterboxd doing that) but it's essentially a one-joke movie establishing the character that....would become Pixar's mascot and be frozen squashing things in eternity because that's about all old Luxo is capable of (the uncharitable here--i.e. me, might point to the shallowness here as a forerunner of, uh, CARS). That being said, there's absolutely nothing wrong with this short per se (simplicity does make it hard to argue with) and the short definitely has historical value in terms of highlighting where Lasseter and Pixar would start out from. The animation itself is kind of crude by contemporary standards, but hasn't aged as badly as a lot of CGI that came after it--the soft glow from the lightbulbs helps I think, as does the genuinely impressive hardwood floor. And while it's easy for me to look back at this in 2019 and be jaded by it, it's even easier to imagine how inspiring it must have been to people who WANTED to use computers to make animation in the 1980s