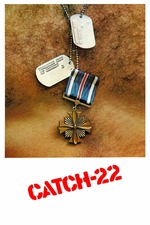 It's based on one of the best novels ever written.

And Mike Nichols helms it. So expectations were running high. I can't say they were met, but this is certainly an interesting film.

The most notable thing about this film is how much effort Nichols puts into moving the camera in interesting ways. We open up with an impressive long take that establishes how involved the shifting perspective will be. The oddball framing and attention-calling motion adds to the surrealist nature and complements the absurdity of the script's contents well.

The performances are a mixed bag. Arkin is decent as Yossarian, our disillusioned and perhaps crazy protagonist. There are moments where it feels like he's laughing at the jokes on-screen, and it's hard to tell if that's supposed to be his character. Tonally, he's inconsistent, unable to decide whether he ought to be wryly and resignedly clever or teetering on the edge of maniacal incredulity. But again, perhaps that's intentional. It just makes the witty lines harder to appreciate because the type of humor we're experiencing is continually oscillating.

Welles is certainly the highlight, but he's not featured very extensively. Most of the others are pretty questionable, for many of the same reasons as Arkin. It seems like Welles is the only one who can play his character straight.

The haphazard and chronologically muddled method of storytelling imitates its source material, but with so little time to cram in so many characters and events, the hard-hitting, bring-you-back-to-Earth moments of real loss and tragedy see their emotional resonance diminished, and their scattered placement makes it harder to track Yossarian's descent into total hopelessness.

There's still some good stuff here: interesting, impactful camerawork, plenty of clever quips (albeit all ripped from the novel), and a stellar performance from Welles. But mostly this feels like a tribute to a great work rather than a great work itself.