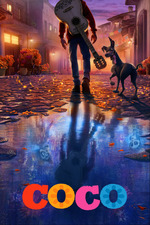 A very vibrantly colored and emotionally effective work that is nonetheless mostly empty and unoriginal.

This is a tried-and-true, check-all-boxes, see-every-single-thing-coming story with bland, throwaway characters filtered through admittedly eye-popping and true-to-the-culture (at least from what I understand and have read from more knowledgeable persons) aesthetic.

And for a movie ostensibly revolving around music, the music is very, very unimpressive.

I wonder if I wouldn't like this more had I watched the Spanish version instead. The voice acting is just OK here, and the odd clash of Mexican-through-and-through traditions and occasional Spanish-language terms with general English communication feels disingenuous.

I understand that without producing and promoting foremost an English-language version, Pixar stands to lose a lot of money here, but as long as they're going to take those dollars they're going to receive honest criticism from me that it feels unnatural and strange.

The only part of the story I didn't see coming was the twist of De Cruz being a murderous, lying sack of shit, but that comes out of absolutely nowhere and doesn't really feel right either.

And Coco has had compiled evidence stored away for about 100 years but literally no one knew about it?

I just don't buy it at all. And the convenient every-single-injustice-gets-corrected ending really ruins the previously frustrating but impressive theme of the wrong person sometimes coming out on top. Here I thought Pixar was being bold and saying something about the actual world, but it turns out it was just a prelude to a cheap didactic mess that makes everybody feel better when they walk out of the theater.

What is it we're supposed to have learned here? That if you stumble into massive supernatural coincidence everything will be OK? The original theme about the conflict between being your own person and being who your family wants you to be is tossed right in the trash.

Animated movies (and to some extent, big-budget movies in general) have become a game of "How can we repackage this formula in a way that will be received well critically?" And the answer is "give a shout out to minority group X."

And don't get me wrong, I'm very happy to see diverse representation in mainstream films. But I'm not happy that it's tied to the same tired boxes these studios can no longer be bothered to think outside of.